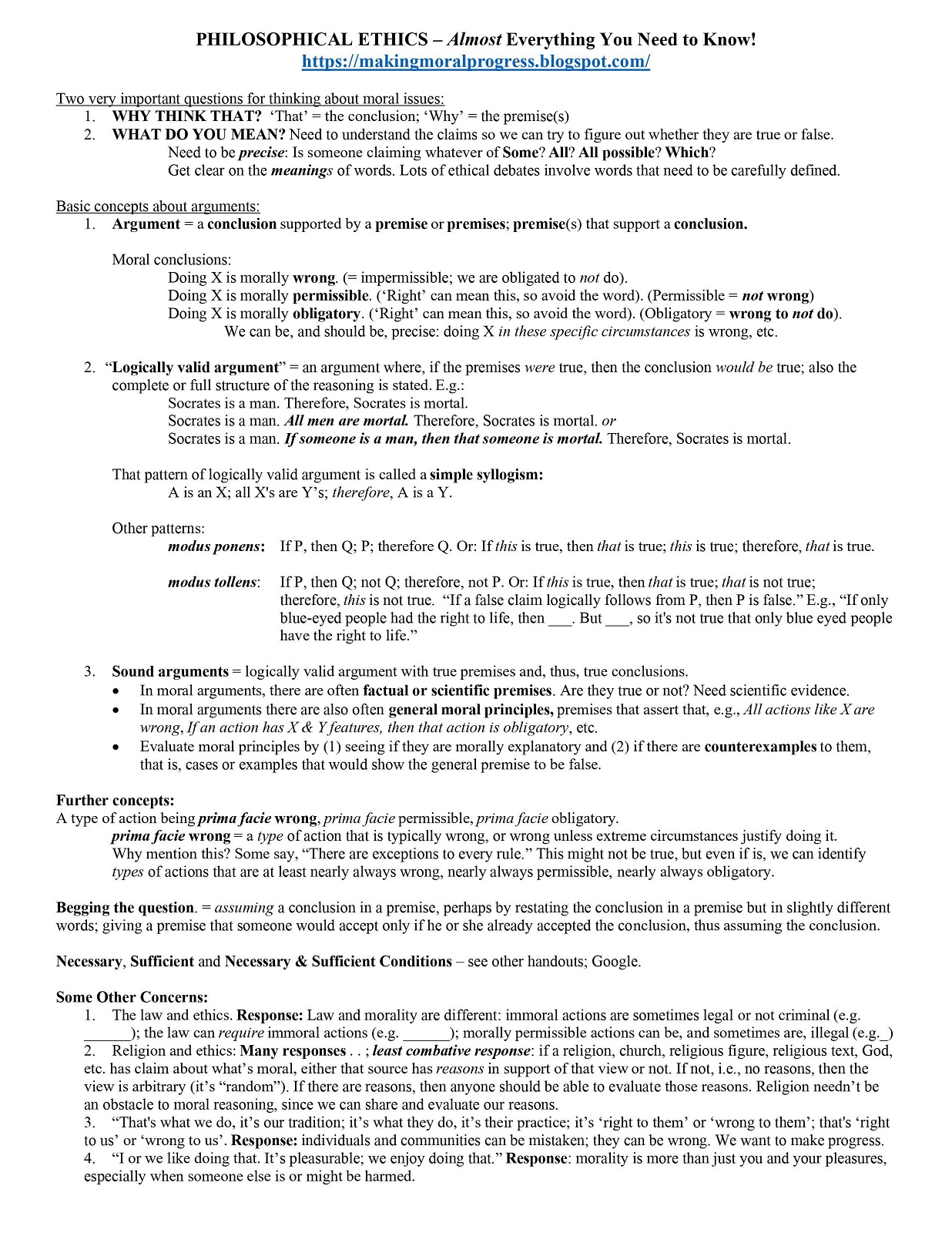 PHILOSOPHICAL ETHICS – Almost Everything You Need to Know! https://makingmoralprogress.blogspot.com/

2.       WHAT DO YOU MEAN? Need to understand the claims so we can try to figure out whether they are true or false.

Need to be precise: Is someone claiming whatever of Some? All? All possible? Which?

Get clear on the meanings of words. Lots of ethical debates involve words that need to be carefully defined.

1.       Argument = a conclusion supported by a premise or premises; premise(s) that support a conclusion.

Doing X is morally wrong. (= impermissible; we are obligated to not do).

Doing X is morally permissible. (‘Right’ can mean this, so avoid the word). (Permissible = not wrong)

Doing X is morally obligatory. (‘Right’ can mean this, so avoid the word). (Obligatory = wrong to not do).

We can be, and should be, precise: doing X in these specific circumstances is wrong, etc.

2.    “Logically valid argument” = an argument where, if the premises were true, then the conclusion would be true; also the complete or full structure of the reasoning is stated. E.g.:

Socrates is a man. All men are mortal. Therefore, Socrates is mortal. or

That pattern of logically valid argument is called a simple syllogism:

·         In moral arguments, there are often factual or scientific premises. Are they true or not? Need scientific evidence.

·         In moral arguments there are also often general moral principles, premises that assert that, e.g., All actions like X are wrong, If an action has X & Y features, then that action is obligatory, etc.

·         Evaluate moral principles by (1) seeing if they are morally explanatory and (2) if there are counterexamples to them, that is, cases or examples that would show the general premise to be false.

prima facie wrong = a type of action that is typically wrong, or wrong unless extreme circumstances justify doing it.

Why mention this? Some say, “There are exceptions to every rule.” This might not be true, but even if is, we can identify types of actions that are at least nearly always wrong, nearly always permissible, nearly always obligatory.

2.       Religion and ethics: Many responses . . ; least combative response: if a religion, church, religious figure, religious text, God, etc. has claim about what’s moral, either that source has reasons in support of that view or not. If not, i.e., no reasons, then the view is arbitrary (it’s “random”). If there are reasons, then anyone should be able to evaluate those reasons. Religion needn’t be an obstacle to moral reasoning, since we can share and evaluate our reasons.

3.       “That's what we do, it’s our tradition; it’s what they do, it’s their practice; it’s ‘right to them’ or ‘wrong to them’; that's ‘right to us’ or ‘wrong to us’. Response: individuals and communities can be mistaken; they can be wrong. We want to make progress.

4.       “I or we like doing that. It’s pleasurable; we enjoy doing that.” Response: morality is more than just you and your pleasures, especially when someone else is or might be harmed.

New comments are not allowed.